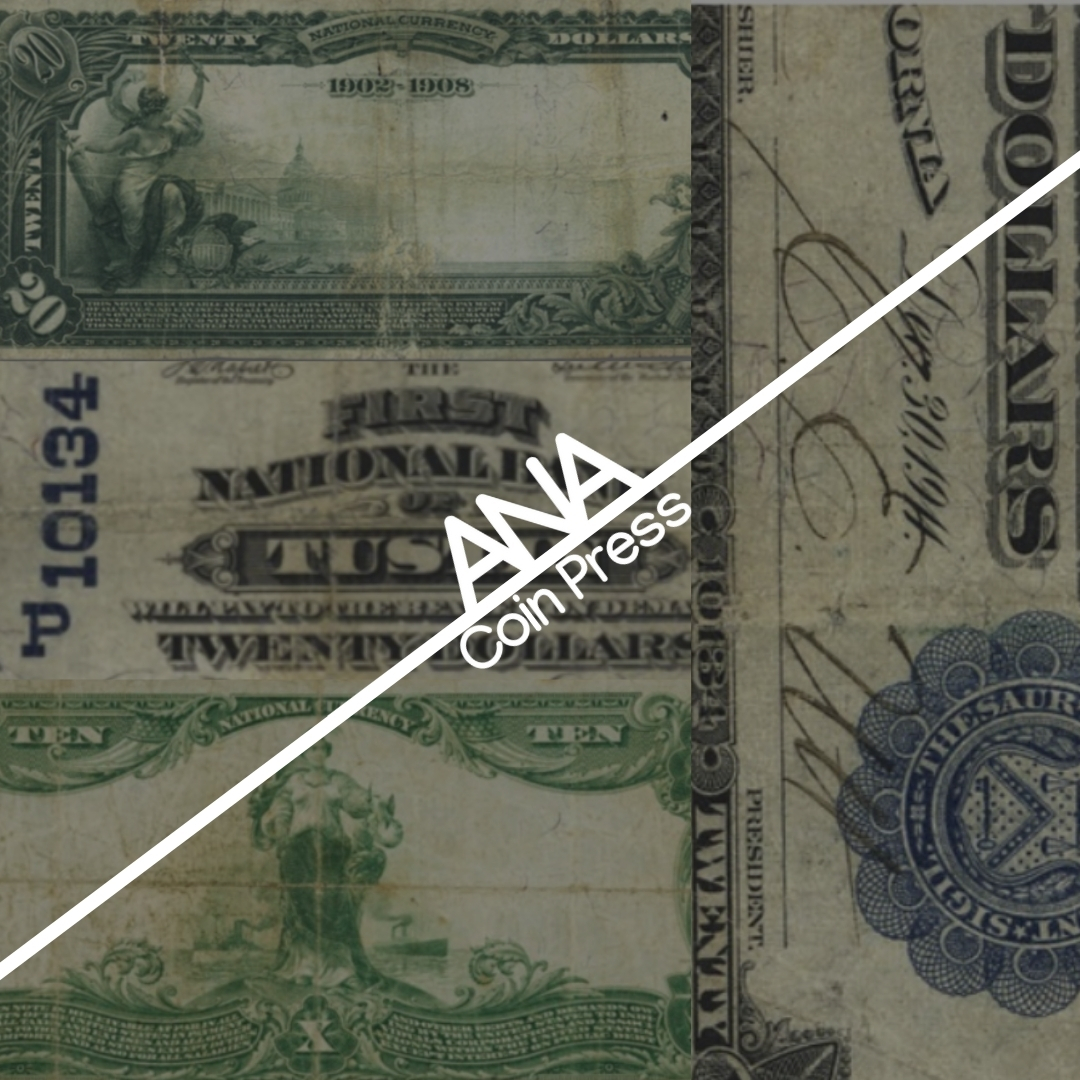 The First National Bank of Tustin

During its 24-year history, a California financial institution issued four types of notes, of which very few exist today.

The first national bank of Tustin was located on the northwest corner of West Main Street and El Camino Real (“D” Street) in the heart of today’s Old Town Tustin in Orange County, California. Sadly, it was torn down in 1963 because of its structural instability and concerns about earthquakes. Not much remains of the original building, but if you compare the current site to past images, you can see that remnants of the Victorian-era brick bank are still attached to the side of the former Tustin Hardware, now a U.S. Post Office and Mrs. B’s antique shop. 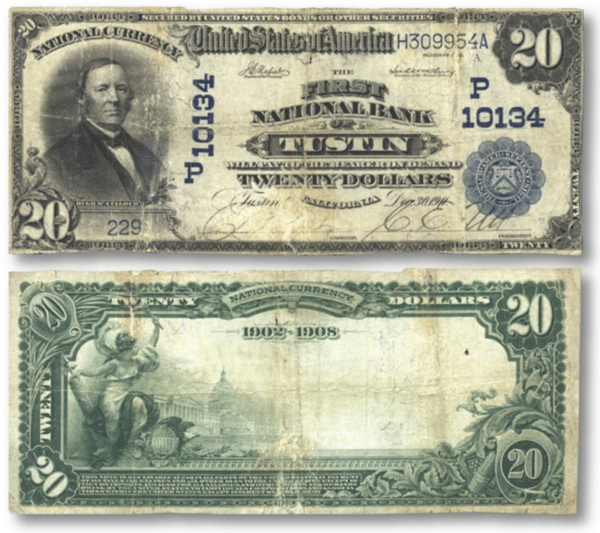 ▲ THIS SERIES OF 1902 “Dated Back” notes can be identified by the 1902-1908 date on the back, the geographical letter “P” below and above the charter numbers, and the Treasury serial number in the upper right-hand corner. Photo: Heritage Auctions

The first notes issued by The First National Bank of Tustin are referred to as the “Third Charter” or “Series of 1902.” As mentioned earlier, the bank did not exist in 1902, and this series of notes was issued at its inception. The Series of 1902 can be categorized by two distinct types: “Dated Back” and “Plain Back.” The former is often referred to as Dated Back because of the years 1902-1908 on the back, but the series has two additional defining characteristics that distinguish it from its predecessor. The first is a large capital letter, known as a “geographical” letter, below the left charter number and above the right charter number. The letter “P” signifies it was issued for the Pacific region, which included most Western states, as well as Alaska and Hawaii. The second major difference is the Treasury serial number in the note’s upper right corner.

The notes were listed alphabetically with plate-position letters A, B and C for the $10 and A for the $20. The note pictured above was the fourth one on sheet 229. It bears the signatures of Bank President C.E. Utt and Cashier E.J. Cranston. This is the only known example that shows these two names together, although other signature combinations certainly existed at one time. For instance, notes released in 1912 would have had the signatures of Bank President W.C. Crawford and E.J. Cranston, but none of these specimens are thought to exist. Currently, there are no known examples of the $10 Dated Back. (The $20 pictured is believed to be the only one.)

"The BEP proof shows the original 10-10-10-20 format, allowing one to envision what the currency sheets would have looked like."

The image below is a unique U.S. Bureau of Engraving and Printing (BEP) proof sheet, which is housed in the National Numismatic Collection at the Smithsonian Institution. The sheet was used to produce this series (large-size Dated Back), as well as the preceding specimen (large-size Plain Back). Like those from other National Banks, this sheet is printed with the main design in black only. The upper-right margin features the dates 1902-1908, as seen on the reverse of the Dated Back series. Some official notations are found at the bottom. The lower-right margin shows a date stamp of FEB 17 1912 with hand initialing, and the lower left is stamped “Approved:” and “Director.” with handwritten initials. Each note was stamped with BUREAU OF ENGRAVING AND PRINTING in a circular border and SPECIMEN at the center.

This unique sheet is extremely important for several reasons. Not only is it the only known sheet of large-size Tustin Nationals of any kind, but it also shows the original 10-10-10-20 arrangement, allowing one to envision what the currency sheets would have looked like when they arrived at the bank. The only real difference is that they would have been printed on bank-note paper in color on both sides, including the serial numbers, charter numbers and other final elements.

Similar 10-10-10-20 sheets were printed with serial numbers ranging from 601 to 1200. This accounts for a second release in the same quantities, again with a $30,000 total face value. Currently no notes with this serial number range are known to have survived. It also is uncertain if these are of the Dated Back or Plain Back type.

The second type of Third Charter or Series of 1902 notes issued by The First National Bank of Tustin are referred to as Plain Backs, which are similar to Dated Backs but are missing the dates and geographical letter. The other major difference is that the U.S. Treasury serial number is replaced with a second serial number. These notes were likewise released in $10 and $20 denominations, four notes to a sheet in a 10-10-10-20 configuration. The serial numbers for this printing were 1201 to 10023, accounting for a total of 35,292 notes with a face value of $441,150. As with the previous series, the notes were listed alphabetically with plate-position letters A, B and C, and an A for the $20. Only four notes are known from this series (three $10 and one $20). Two different signature combinations are noted for the signers. The note pictured here bears the signature of Bank President C.E. Utt and Cashier C.A. Vance. A second signature combination occurred slightly later and included the names of C.A. Vance (president) and W.S. Leinberg (cashier), which is the same combination found on the preceding small-size notes.

▲ THIS THIRD CHARTER $10 “PLAIN BACK” NOTE with blue seal is one of 35,292 specimens issued of this type, of which only four are known to have survived. Photo: Ken Ponterio

The third type of note issued by The First National Bank of Tustin was the small-size Type I Series of 1929, which resulted from the July 10, 1929, decision to reduce the size of U.S. paper money. This change saved on paper costs, as each sheet contained six notes instead of four. Each note shared the same serial number, but different prefix letters ranging from A to F signified its plate position. Notes were arranged on the sheet in alphabetical order. (Currency in this series is identical in size to paper money currently in circulation.)

▲ THE SMALL-SIZE TYPE I $10 (top) is one of only a dozen specimens known to exist (including an uncut sheet of six). The current population of the Type I $20 (bottom) also is 12. Photos: Heritage Auctions ($10) & Ken Ponterio

The fourth type of note released by The First National Bank of Tustin was the small-size Type II Series of 1929, issued only in $5 denominations. Similar to Type I, these notes bore added features, including an extra charter number in front of the top-right serial number and after the bottom-left serial number. A total of 5,340 Type II $5 sheets were printed, accounting for a total of 32,040 notes with a $160,200 face value. Unlike the previous series, each note bears a unique serial number, starting with 1. Only 12 notes are confirmed to exist today, as well as an uncut sheet of six with a serial number range of 1 to 6, for a total of 18 known specimens.

▲ THE SMALL-SIZE TYPE II $5 includes the bank’s charter number in red ink next to the serial number. Photo: Ken Ponterio

The earliest known series of bank notes issued by The First National Bank of Tustin bear president C.E. Utt’s signature. To this day, the Utt name is well known in the Tustin community, and C.E. Utt Middle School is named after the prominent banker.

▲ THE EARLIEST SERIES of bank notes from The First National Bank of Tustin bear the signature C.E. Utt, whose name is still well known in the area.

The photograph below shows some of Tustin’s historical structures that share an interesting connection. It depicts the town’s early transportation system and the bank building at the left. The house at the right was once Utt’s residence. 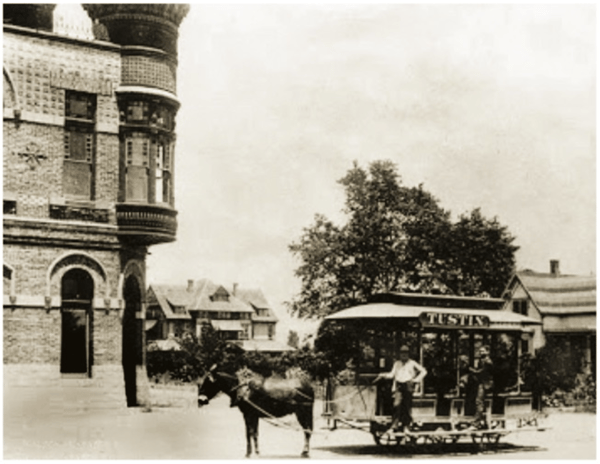 ▲ BANK PRESIDENT C.E. UTT lived in the house at the right, opposite The First National Bank of Tustin, which occupied the building at the left. Photo: Tustin Area Historical Society

The Tustin Hotel, visible in the background, was one of the commercial properties to which The Bank of Tustin loaned a large sum of money. The hotel experienced financial difficulties and was unable to pay back the loan, which contributed to the financial institution’s failure. An interesting side note is that Utt later sold his residence to the Knights of Pythias, which built and still occupies a lodge at the location that also houses the Tustin Historical Society. The bank building was occupied by The First National Bank of Tustin until 1959, when it was bought by First Western Bank ■ Originally published in The Numismatist; November 2015.