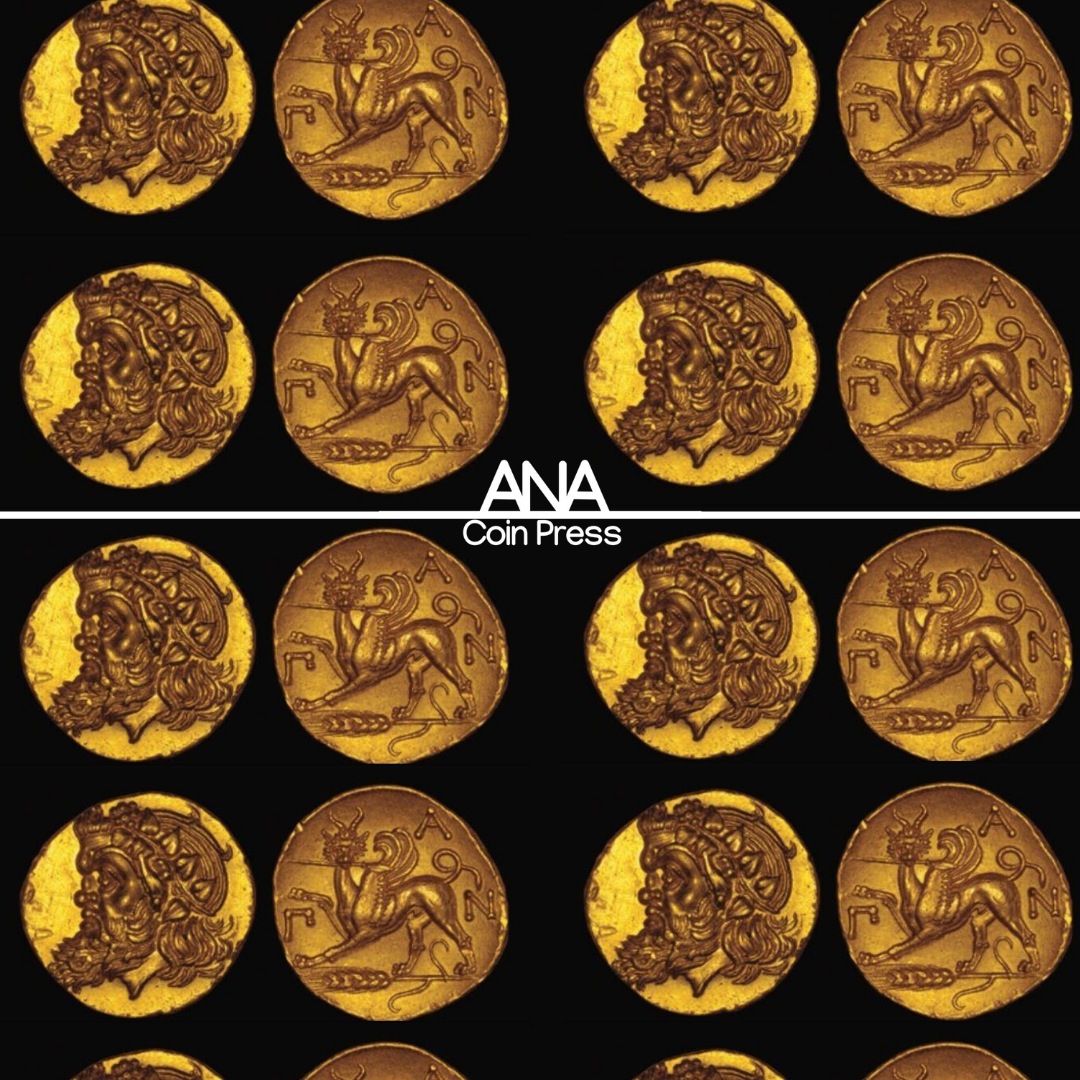 After viewing an inspiring array of Greek issues, a college student wonders, “Why can’t we have coinage like that?”

A friend who is a classics professor at the University of Colorado (CU) in Boulder asked me to give a numismatic presentation to her students to complement her course, Trash and Treasure, Temples and Tombs: Art and Archaeology of the Ancient World. The class was more like a seminar, with potentially nine students attending. It was part of the university’s Residential Academic Program and was held in historic Sewell Hall on CU’s campus.

I planned to bring nine small trays, each with four coins and a loupe, so every student would have something to examine. The trays could be passed around the room, allowing participants to see all the coins and be occupied throughout the presentation. One student was out of town, so just 32 coins were offered. This was preceded by the inevitable PowerPoint production, which established a chronology, briefly addressed the historic environment, and drew attention to points of interest on the coins.

By way of introduction , a mnaïeion of Queen Arsinoe II (316c. 270 B.C.) was circulated, sans flip, among the students. The coin was struck in 204-180 B.C. by King Ptolemy V to honor his deified ancestor three generations after her death . The pupils thought it quite an experience to hold something 2,200 years old. The heavy gold coin bore Arsinoe’s portrait on the obverse, while the reverse depicted overflowing twin cornucopia, indicative of the Ptolemies’ wealth and opulence.

The coin’s inscription ΑΡΣΙΝΟΗΣ (Arsinoe) ΦΙΛΑΔΕΛΦΟΥ (Philadelphia, or “brotherly love”) was quite appropriate, as she did indeed demonstrate love for her brother Ptolemy II when she became his wife. (Unlike traditional Greeks , the Ptolemies embraced complex intermarriages. For example, Arsinoe’s husband’s father’s third wife’s son’s second wife was his sister and also his first wife’s stepmother, both of whom were named Arsinoe.)

During the course of my presentation, I expressed some concern. “I’m afraid I’m losing you,” I said to the class, thinking the PowerPoint program too arcane. But one student quite politely spoke out, “No, please continue.” Fortunately the professor had asked the class to read the American Numismatic Society’s “Introduction to Numismatic Terms and Methods” (numismatics.org/seminar/termsmethods), hence numismatic terminology was not completely foreign.

▲ This tetradrachm of Alexander, struck in Babylon in 325323 B.C., depicts Herakles wearing the pelt of the Nemean lion, which he killed to fulfill the first of his 12 labors (below). Photo: John Nebel / Painting: Wikipedia Commons/Peter Paul Rubens (Artist)

One coin in particular elicited an enthusiastic outburst: “That’s Alexander the Great!” The tetradrachm was minted in Babylon in 325-323 B.C., during Alexander’s lifetime. The obverse shows Herakles wearing the Nemean lion’s pelt. He had killed the creature (known for its lethal claws and impenetrable golden fur) as the first of his 12 labors, thereby acquiring a uniquely useful warrior’s cloak. (Herakles’ labors were required as expiation for murdering his children during a madness induced by the vengeful goddess Hera.) The coin’s reverse portrays Zeus, Herakles’ father, seated upon a throne with his eagle. This imagery was doubly useful, as the Greeks would know the Herakles myths and recognize the King of the Gods. (Many in Asia Minor would see Zeus as Baaltars, a familiar Persian deity.) The coin is a fitting representation of Alexander, a man for whom the impossible was all in a day’s work, albeit a long day.

However, production of Alexander’s immense coinage was more than just a day’s work. According to François de Callataÿ, 60 million tetradrachms were struck using an estimated 3,000 obverse dies. Even though most Alexandrian coins do not portray Alexander himself, this lifetime issue might have presented Herakles with Alexander’s features, as one observant student suggested.

▲ This Athenian tetradrachm, minted in 484-440 B.C., is a tangible reminder of Themistokles and his naval victory over the Persians. Coins such as this funded the construction of triremes, warships similar to this modern re-creation (below). Photos: John Nebel (Coins) & Wikipedia Commons/Michael J. Taylor (Trireme) 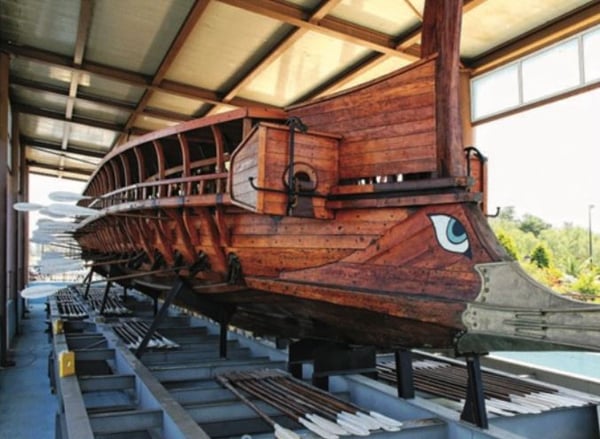 Previously, the professor had discussed the history surrounding an Athenian tetradrachm, so the class understood its remarkable significance. Statesman and general Themistokles correctly assessed the threat of a Persian invasion and convinced the Athenian assembly to use the newly discovered silver deposits in Athens’ Laurium (or Laurion) mines to build a fleet of trireme warships.

In the 1956 edition of Numismatic Chronicle, Colin Kraay reasoned that the great number of dies and stylistic regression indicated a large, hurried coinage, and that the dies, including those that struck this tetradrachm, minted the money that built the Athenian navy. In the 1999 Revue Belge de Numismatique, Ross Holloway agreed: “These are the coins, in my opinion, of the opening of the fifth century and if production of the Laurion mines and the naval building program to meet the Persian menace are reflected in Athenian coinage, it is here.”

Herodotus tells the story of the Persian’s great naval defeat at Salamis in detail in The History. Aeschylus, who was a combatant in the Persian war, wrote The Persians, a remarkable play about the conflict from the Persian perspective. In The Savior Generals, modern historian Victor Davis Hanson names Themistokles as the first of his five subjects.

Themistokles’ foresight had, in effect, saved Western civilization from the Persian menace, and he knew it. Therein lies a lesson for our era—great leaders are not necessarily saints. In Plutarch’s Lives, the book “Themistocles” describes him as rather less than a saint. Themistokles firmly believed he deserved great wealth and respect, which didn’t sit well with the Athenian democracy, whose citizens tired of his attitude and banished him.

Themistokles eventually fled to the Persian court. Plutarch believes that Xerxes, Themistokles’ former opponent, was the Great King at the time. Ultimately, Xerxes accepted Themistokles’ fealty and awarded him three cities—Magnesia, Lampsacus and Myus—for “bread, wine, and meat,” and later Percoté and Palacscepsis for “bedding and raiment.” Themistokles thereby achieved the rich and respectable life he sought, pampered by an enemy of the Greeks. Nevertheless, in his old age, Themistokles rose to the occasion and committed suicide rather than plotting with the Great King against Athens.

“Wow, it’s about the coolest thing ever,” was a student’s opinion of a gold stater, an incredibly beautiful and mysterious coin minted around 340-325 B.C. in Pantikapaion, the capital city of the Bosphoran Kingdom. According to author David MacDonald, the obverse portrait, often thought to be the god Pan because of the reverse inscription ΠΑΝ (“Pan”), lacked horns and thus was likely a satyr, a punning reference and tribute to an early Bosphoran king, Satryus I (433-388 B.C.).

In this case, “Pan” (on some Pantikapaion issues, “Panti”) is clearly an abbreviation of the city’s name. MacDonald says it “seems to be derived from Panti Kapa, which in the Iranian-based language of the tribal peoples meant ‘fish-route,’” referring to tremendous runs of fish through the straits between the Maeotis and Euxine.

The incredible griffin on the reverse raises questions about the genesis of this fearsome lion-eagle creature. In ancient Greece, griffins were thought to be guardians of gold, which provides a hint. After years of research, Adrienne Mayor concluded that the Skythians, whose territory bordered the Black Sea (Pontus Euxinus), found protoceratops skeletons while mining gold in the western reaches of the Gobi Desert. One can imagine ancient artists who, upon hearing tales of the strange creatures guarding the precious metal, invented the griffin. The “gold” guarded by the stater’s griffin was wheat, a source of wealth and the reason for its depiction below the beast. Fancifully, the weapon the griffin carries belongs to Satyrus, who had won the kingdom’s agricultural territory at spearpoint. 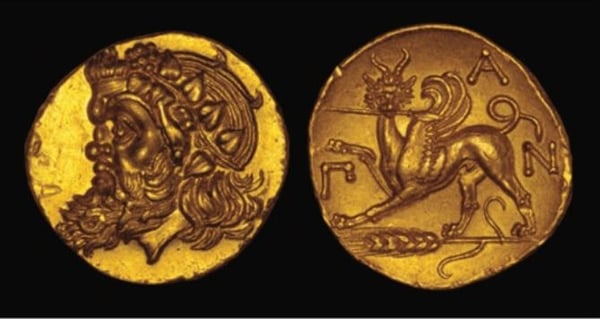 ▲ This gold stater was struck in Pantikapaion around 340-325 B.C. The reverse inscription, ΠΑΝ, is an abbreviation of the city name. The griffin on the reverse might have been inspired by the discovery of a protoceratops skeleton (below). Photos: John Nebel (Coin) & Wikipedia Commons/Karen, Funkmonk (Protoceratops)

Another student declared, “That’s the most amazing thing I’ve ever seen,” referring to an Akragantine tetradrachm. The probable date of this coin (407 B.C.) marked a dangerous time for the City of Akragas, which was preparing for an invasion by the Carthaginians. The tetradrachm appears to have been propaganda intended to rally soldiers and citizens. On the obverse, Nike, goddess of victory, drives a war chariot. The city is proclaimed the victor on a tablet above, hanging on a “peg” imaginatively worked into the coin’s design. The coin essentially proclaims “We Can Do It!”

The reverse harks back to myth, with the two eagles feeding on a rabbit drawn from Aeschylus’ metaphoric treatment of the sacrifice of Agamemnon’s daughter Iphigenia. (She had been offered up to the gods in exchange for fair winds to power Agamemnon’s and Menelaus’ ships as they sailed to wage war on the Trojans.) Agamemnon and Menelaus are the eagles, feasting on a defenseless pregnant rabbit whose severed head lies below—a gruesome image. Aeschylus wrote:

Kings of birds to the kings

one black, one blazed with silver,

clear seen by the royal house

on the right, the spear hand,

they lighted, watched by all tore a hare, ripe, bursting with

stayed from her last fleet running.

▲ This Akragantine tetradrachm likely dates to 407 B.C., when the City of Akragas was bracing for an invasion by the Carthaginians. Photo: John Nebel

Despite the charioteering Nike and recollections of the ancient glory of the Trojan War, fate was not kind to Akragas, and the city was destroyed by the Carthaginians in 406 B.C. (Perhaps the gods frowned on the invocation of the ghosts of the cursed House of Atreus.)

“Why can’t we have coinage like that?” a student asked in a subsequent class. The answer lies in a letter penned on November 11, 1905, by sculptor Augustus Saint-Gaudens to President Theodore Roosevelt:

You have hit the nail on the head with regard to the coinage. Of course the great coins (and you might almost say the only coins) are the Greek ones you speak of, just as the great medals are those of the fifteenth century by Pisanello and Sperandio. Nothing would please me more than to make the attempt in the direction of the heads of Alexander, but the authorities on modern monetary requirements would I fear, “throw fits,” to speak emphatically, if the thing was done now.

The collaboration resulted in remarkable U.S. coinage designed by Saint-Gaudens and released in 1907, so the appropriate response is “we can!” ■

Originally published in The Numismatist; August 2018. 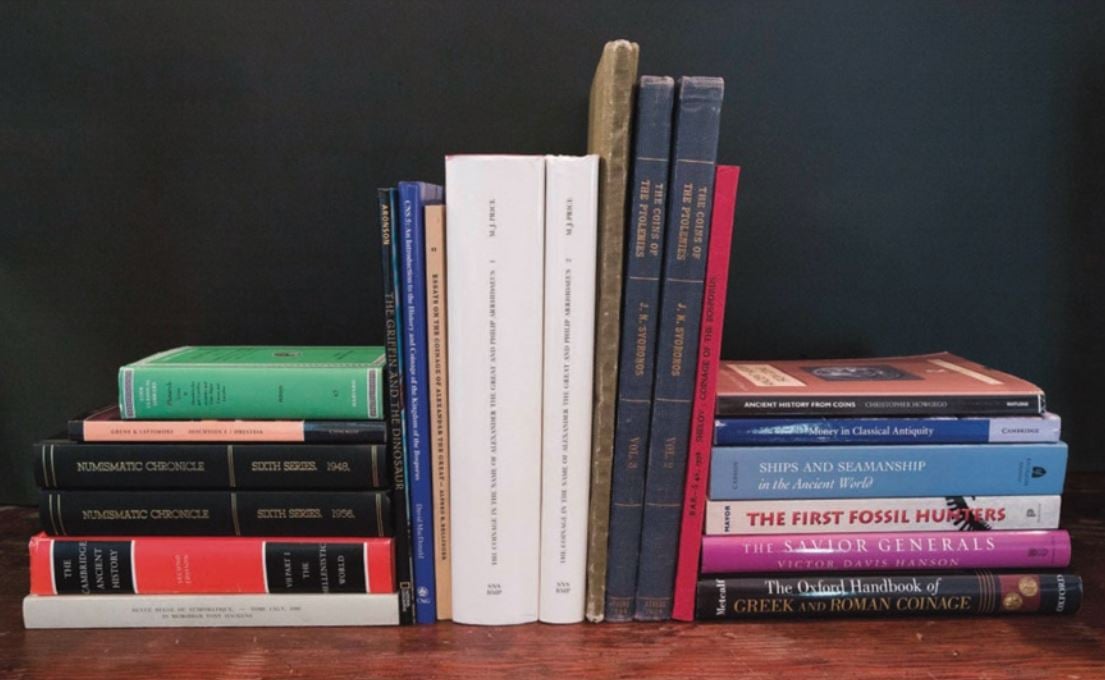 Aronson, Marc, and Adrienne Mayor. The Griffin and the Dinosaur. Washington, DC: The National Geographic Society, 2014.

Kraay, Colin. “The Archaic Owls of Athens.” The Numismatic Chronicle (1956).

MacDonald, David J. An Introduction to the History and Coinage of the Kingdom of the Bosporus. Lancaster, PA: Classical Numismatic Group, Inc., 2005. (BB82.Mac.)

Price, Martin Jessop. The Coinage in the Name of Alexander the Great and Philip Arrhidaeus, Volumes 1 and 2. Zurich: Swiss Numismatic Society, 1991. (BB40.Pri.M)

Saint-Gaudens, Homer. “Roosevelt and Our Coin Designs.” The Century (April 1920).

Seltman, Charles. “The Engravers of the Akragantine Decadrachms.” The Numismatic Chronicle (1948).