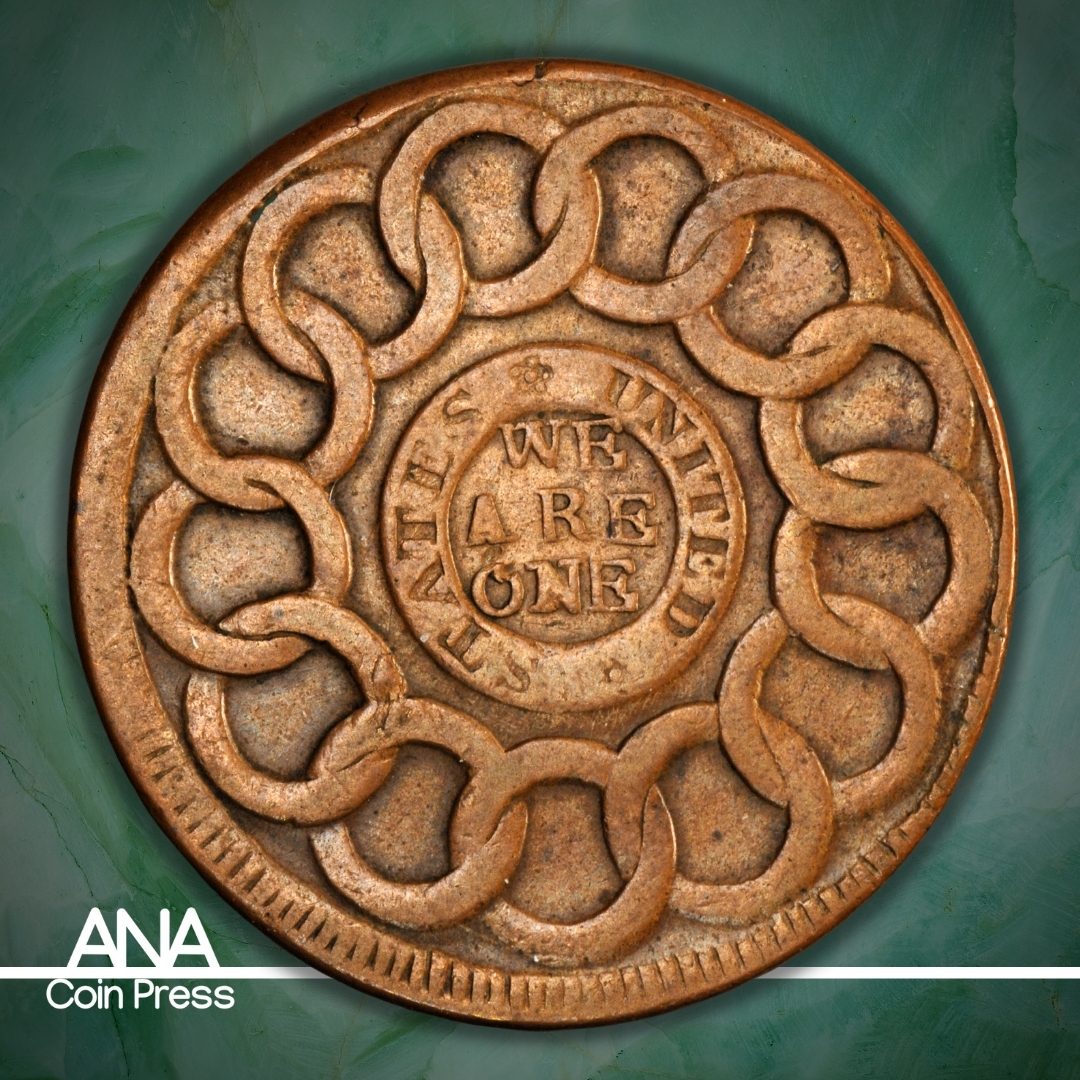 In numismatics, as in life, it’s wise to follow the Fugio Cent’s advice —“mind your business” because “time flies.”

There’s an interesting difference between numismatic shopping and other consumer experiences. Most non-numismatic purchases occur in a simultaneous marketplace, where buyers can consider a wide range of products, maybe even every possible product, all at once. Think about buying cereal in the grocery store, or shopping for books online — there’s so much variety that you’re highly unlikely to miss out on anything.

But collectible coins and currency are found in a sequential marketplace, where it’s only possible to see a small subset of the available possibilities at any one time. You might visit a coin shop and see one dealer’s inventory. Or you might attend a coin show with lots of dealers, but still, you’ll only peruse one at a time. Even online listings, extensive as they are, are constantly updated.

This means that whatever particular item you’re looking for, it’s hard to know when the right one has come along and it’s time to stop looking. Sometimes, when the price tag is low, the consequences of a less-than-perfect purchase may be tolerable. But, when dealing with more substantial items, numismatists have to walk a line between haste and deliberation.

I had this perspective in mind as I undertook a coin quest at the ANA World’s Fair of Money® a few years ago. I endeavored to acquire a Fugio Cent, which is, to me, one of the most interesting United States coins. It was the first American federal issue, authorized by the Continental Congress in 1787 and made in that one year only (by a private contractor — the establishment of the United States Mint was still five years away). 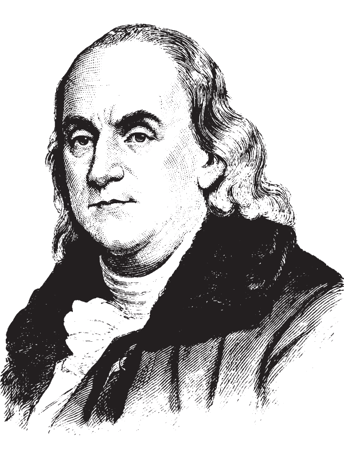 The design is credited to Benjamin Franklin — as if securing American independence through diplomacy weren’t enough of a contribution to the new nation’s identity! I’ve really come to appreciate the coin’s motif. A sundial, representing time, and the Latin word “FUGIO,” meaning “I fly,” together send the message that “time flies.” And the phrase “MIND YOUR BUSINESS” reminds us to pay attention to the things that really matter.

I had never really looked at Fugio Cents before, but from the Red Book and various online auction records I had a pretty good idea of what I could get at various price points. I concluded that I would rather have a nice, affordable common variety than an expensive, esoteric variety. And I knew that I definitely wanted to avoid the mid-19th century restrikes which would, to me, defeat the purpose of owning a piece of American history.

When I started my search at the convention, the first thing I noticed was considerable variability in the distribution of Fugio Cents. Popular American coin series like Morgan dollars, Buffalo nickels, and Lincoln cents are everywhere, and most dealers have at least a few. Not so with Fugio Cents. Fugios are almost entirely in the realm of dealers who specialize in colonial and early federal coinage.

My first stop was the table of a dealer friend, well-known in the field of colonial numismatics. He didn’t have any coins for me, but he did offer some useful advice. And, I was inspired by his optimism that there was a Fugio cent for me somewhere out there on the bourse floor.

At another table I saw a bunch of Fugios in Very Good condition, which the dealer fondly described as “dogs.” The price was right, but the coins definitely weren’t. Soon after that I encountered a somewhat nicer example, in Fine condition, with a pleasing tan color. I decided to ponder it overnight, but when I went back the next day it was gone. From that point on I tried, mostly successfully, not to romanticize it as “the one that got away.”

"Collectors shouldn’t settle for anything less (or more) than what they’re looking for; the long-term regret will soon outweigh the short-term temptation."

The more I saw, the more I noticed the variability in the coins I was seeing – in more than just the coins’ grades. It’s a numismatic truism that a coin’s grade is not always a perfect indicator of its appeal – especially with early copper. Maladies were common, including problems with planchets (pits, digs, or flakes), and weak or imbalanced strikes. Yes, these characteristics are part of a coin’s “character”... just as long as they’re not distracting.

At one point I saw a coin in EF (Extremely Fine) condition that was a contender for a while. But the piece that really caught my eye was one in About Uncirculated (AU-58) condition, just short of Mint State. Of course, it had a price tag to match its quality. Again, I dithered.

But I couldn’t get that AU-58 out of my mind. I must have visited it at least four times. It was certainly nice … but would I regret buying it? Or would I regret not buying it? In a way, its nearly pristine level of preservation was off-putting; I felt that a circulated piece would have more character. In the end I couldn’t pull the trigger. It just wasn’t quite right.

By that time the show was winding down, and I had to face the prospect of remaining Fugio-less for at least a few more months. That was somewhat frustrating, but I decided that I would rather wait than buy something — especially something expensive — that I didn’t feel 100% good about. 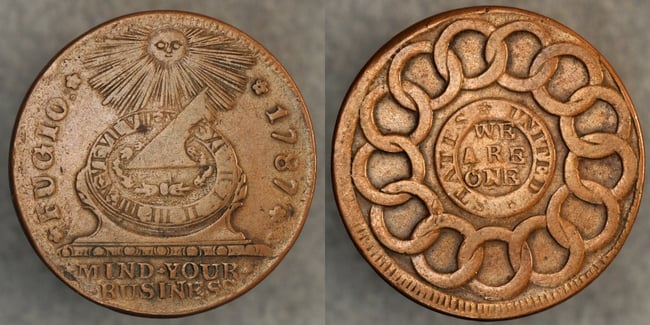 Then, in a section of the show I had previously missed (it was a very large venue), I encountered a dealer with several cases of Large Cents. Early coppers tend to go together, so I asked if he had any Fugios — lo and behold, he did. It just so happened that he had purchased a Very Fine example that very morning. When he handed it to me, I had a feeling that I was getting close. But would the feeling last?

I asked for his best argument, and his best price, for the coin. He told me that he rarely saw a coin this nice, especially for the grade — and after three days of searching I had to agree. And his best price was right — more than the dogs, but considerably less than the higher-grade examples I had been considering. I finally had my Fugio Cent!

I went back to my dealer friend, the one with whom I had started my quest two days earlier, to show him my new purchase. I felt gratified, and validated, when he said “you made the right choice — 100%.”

My quest had brought me 100% success at finding a lovely coin, but more than that, I also gained some useful perspective on numismatics. Sometimes it’s true that “he who hesitates is lost,” but that may be a chance worth taking to avoid a hasty decision about an important purchase. Collectors shouldn’t settle for anything less (or more) than what they’re looking for; the long-term regret will soon outweigh the short-term temptation. Most importantly, don’t give up… the right coin, for the right price, is out there.