In the modern era, Americans have become accustomed to a monetary system with only four circulating coins.  But the familiar penny, nickel, dime, and quarter actually represent a historic low in denominational diversity.

At one time or another, fifteen different denominations have been made for circulation by the United States Mint, from the lowly copper ½ cent to the glittering gold $20, and until the 20th century there were often 8-10 different coins in active circulation.  In fact, over the course of American history there have been eight different coin types valued at five cents or less.

How did we end up with dollars and cents in the first place?  For that (along with much else), we have Thomas Jefferson to thank.  In a 1784 report, Jefferson recommended that a coin equivalent to the familiar Spanish Milled Dollar (officially 8 Reales) should be the monetary unit of the United States.  Another of Jefferson’s recommendations was more radical:  that there should be 100 cents to the dollar.  We take this type of system for granted today, as does the rest of the world.  But in the late 18th century decimal fractions, and especially their application to money, were relatively new.

The earliest issues of the United States Mint, beginning in 1793, reflected this novelty.  Our humblest coins, the cent and half-cent, stated their denominations in two ways:  in words, and also with fractions indicating their relationship to the dollar (1/200 for the half-cent, 1/100 for the cent).  For a new nation with a new monetary system and new coins, better to over-explain than to under-explain. 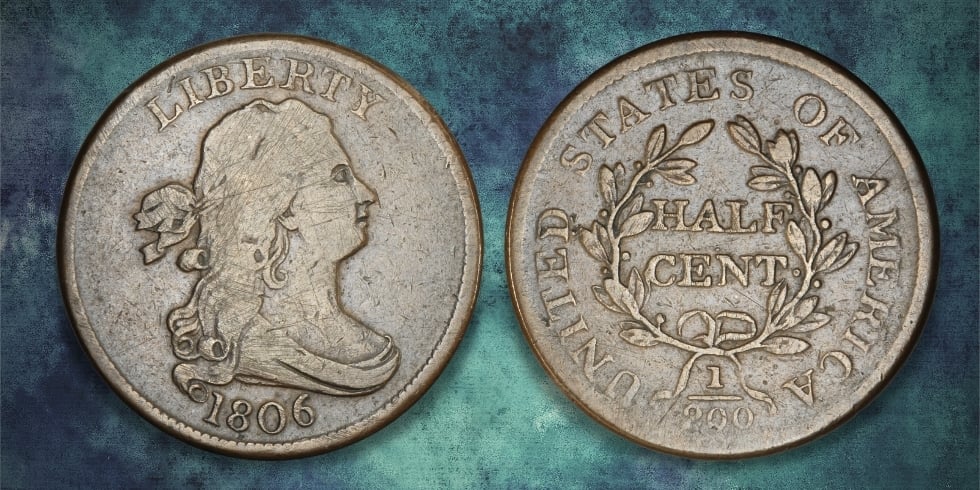 A half-cent may not seem like much, but in the 1790s the coin had approximately the purchasing power of 12 cents today.  It was a large-ish coin, almost the size of a modern quarter.  At the time it made sense as a component of small transactions, and as a bridge between the new decimal system and the Spanish colonial system (where 1 real = 12½ cents).  But the coin fell into disuse, and after 1835 mintages were minimal.  The half-cent was officially abolished in 1857.

The one-cent piece has been the most enduring, and most plentiful, of all American coins.  While the denomination has persisted – cents have been coined in every year except 1815 – its physical form has changed numerous times.  The large cents became “Large Cents” with the introduction of a smaller cent in 1857.  These were the same size as today’s cent, but thicker, and made of a copper-nickel alloy.  They were issued to redeem Spanish silver coins, whose legal tender status was ending. 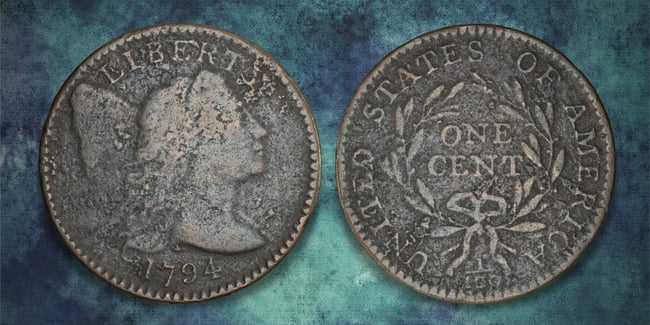 But issues became overissues, to the point where the new cents became something of a nuisance. Then, as they say, easy come easy go, and the copper-nickel cents disappeared from circulation amid the economic chaos of the Civil War.  In this era the Mint was gradually, if partially, abandoning the idea that metal value should equal face value, and a switch to bronze in 1864 brought the cent back to active circulation.

After the chaos of the Civil War era subsided, cents were minted by the millions, and later, billions.  Bronze yielded temporarily to steel in 1943, to conserve copper during World War Two.  Aluminum cents dated 1974 never got beyond the experimental stage, but the cent switched permanently to copper-plated zinc in 1982 due to rising metal prices. 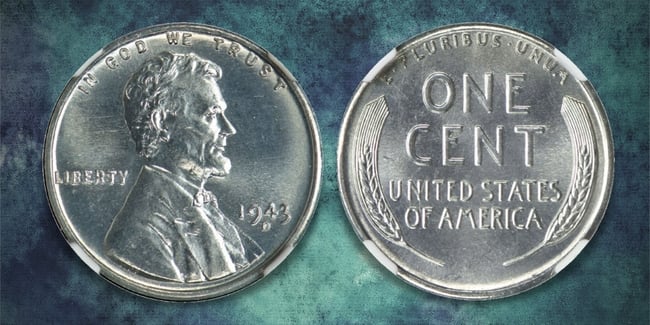 Today, with a production cost hovering around 2 cents, there have been calls for eliminating the cent.  Many nations have done away with their equivalent coins, rounding cash prices to the nearest 5 cents, and the idea has a certain economic logic.  But the penny has persisted in one form or another for over two centuries, and it’s probably not going anywhere anytime soon.

The small cent has been in circulation continuously, but to a contemporary American, the rest of the pocket change of earlier eras would seem quite strange.  At various points in the second half of the 19th century there were not one, not two, but three different coins valued between 1 cent and 5 cents:  a 2-cent piece and two types of 3-cent piece.  And the familiar nickel was itself quite new, replacing a small, silver half-dime.

"More than just quaint curiosities, these collectible coins from an earlier era are tiny, everyday reflections of American history. "

The two-cent piece is a perfect example of the connection between history and numismatics.  When the coin was introduced, the nation was fully in the throes of civil war and economic chaos.  Gold and silver coins had disappeared from circulation, driven out by inflated paper currency.  Copper-nickel cents were the only metallic money available, but a limited supply of nickel meant that the Mint could not keep up with demand.  Bronze tokens, with numerous patriotic and mercantile designs, filled the gap.

To keep up with the demand for small change, bronze 1-cent and 2-cent coins were introduced in 1864.  The 2-cent piece was a totally new denomination, intended to ease the burden on the 1-cent piece.  The 2-cent piece only lasted until 1873, but the motto it carried – In God We Trust – has endured.   History almost repeated itself when the idea of a 2-cent piece was revived during the penny shortage of 1973-1974, but the project never made it past the drawing board.

The 3-cent piece is among the oddest of odd denominations.  But when it was introduced in 1851 the coin had a very practical purpose:  purchasing postage stamps at the new 3-cent first class rate.  Its role soon changed, in unexpected and dramatic fashion.  The California gold rush, by lowering the value of gold, drove silver coins from circulation – with one exception:  the tiny 3-cent piece, which had proportionally lower silver content.   The situation was remedied, and the role of the 3-cent piece lessened, when the weight of silver coins was reduced in 1853.

During the Civil War and for a decade afterwards paper currency was predominant, a situation that was especially inconvenient for denominations less than a dollar.   The 3-cent “nickel” (actually 75% copper and 25% nickel) was introduced in 1865 as a replacement for a note of the same denomination.  That helped, slightly, but only until a new 5-cent piece arrived on the scene.  The silver 3-cent piece was eliminated in 1873, and the copper-nickel version held on until 1889. 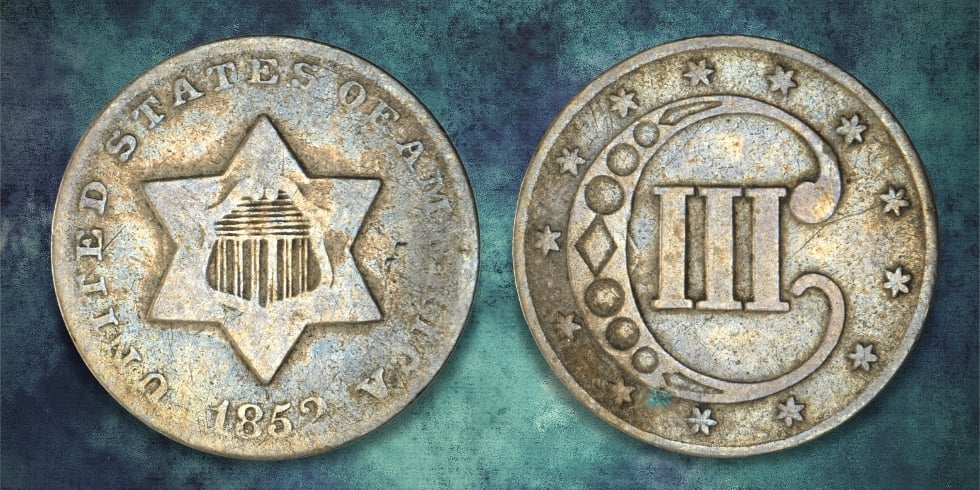 Just as the first “nickel” wasn’t a five-cent piece, the first five-cent piece wasn’t a nickel.  Small, silver half-dimes were made beginning in 1792, though issues were sporadic at best.  The economics of minting were the reason, as it was much easier to make one half-dollar than ten half-dimes, the needs of commerce notwithstanding.  Half-dime mintages perked up after a reform of Mint procedures in 1837, and remained robust until the Civil War.

The half-dime, like all silver coins, disappeared during the Civil War and was replaced by a small, paper equivalent.  But unlike its larger counterparts, the half-dime was never to return – it was abolished in 1873. Its 75% copper-25% nickel replacement appeared in 1866.  In its 150-year history the nickel has included an infamous mistake (an 1883 issue missing the word “Cents”), a famous rarity (the clandestinely-made 1913 Liberty nickel), and an artistic triumph (James Earle Fraser’s Indian/Buffalo design of 1913-1938).

The coin was also called into service during World War Two, when “nickels” were made with silver, copper, and manganese – thus preserving nickel for the war effort.  In recent years the coin has had a metal value exceeding its face value, with a production cost of up to 10 cents, but, despite some experimentation, as yet no alternative compositions have emerged.

In total that’s five denominations, in eight different incarnations – all valued at five cents or less.  These small denominations have a large place in American coinage history.