More than just geographic neighbors, the three major nations of North America have shared numerous historical and contemporary experiences – including in the realm of numismatics.

When numismatists say they collect "world coins," they usually mean that they collect coins from countries other than the United States. But I don't make the same distinction. The United States is part of the wider world, and I like to arrange my collecting pursuits accordingly.

To see the value of this cosmopolitan approach to numismatics, consider the coins of Canada and Mexico. The United States and its neighbors are connected by geography, history and economics, so it's not surprising that their numismatic legacies also are closely related, with many comparisons, and some contrasts, among the three countries.

Soon after the United States was "conceived in liberty," the Coinage Act of 1792 reserved one side of each American coin for an image "emblematic of liberty." Since then, varied allegorical figures have presented the concept to succeeding generations. Analogously, our neighbors have their own special imagery that reflects their individual histories.

The obverse of every Mexican coin features a version of a legendary Aztec image. It was said that the Mexica (Aztecs) followed the instructions of the god Huitzilopochtli by founding their city, Tenochtitlan, on the spot where they encountered an eagle on a cactus, devouring a snake. That location later became Mexico City, and the founding image became Mexico's most prominent symbol.

In Canada, the head of state ­- the reigning king or queen of England - appears on the obverse of all the country's coins. Tradition holds that portraits of succeeding monarchs alternate directionally; Queen Elizabeth II faces right, so her successor, like her father, George VI, will face left. And a monarch's portrait may change with age, though the imagery often lags behind reality – a youthful image of Queen Victoria continued to be used even after she was advanced in age. 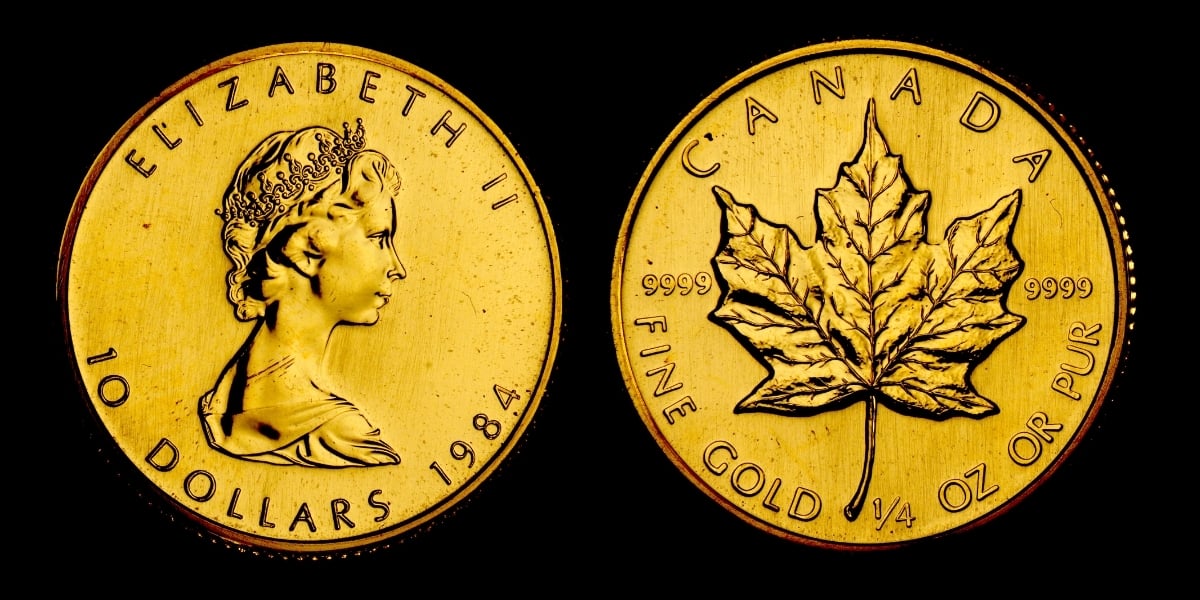 Global influences. Collectors of U.S. coins are familiar with the World War II-era steel cents of 1943 and the nickel-less "nickels'' of 1942-45. In Canada, by far the world's largest nickel producer, the 5-cent piece made its own metallic contribution to the war effort. Canadian "nickels'' of 1942-43 were composed mostly of copper, and those of 1944-45 were made of chrome­plated steel. The coin’s design was part of the war effort, as well. From 1943 to 1945, a large Roman numeral "V" did double duty: indicating the coin's denomination in Roman numerals, and offering an inspiration for victory. Around the perimeter, Morse code spells out the alliterative message "We win when we work willingly."

Momentous events in the British Empire also left traces on Canada's coinage. In the aftermath of King Edward VIII's abdication, as the Royal Canadian Mint waited for new coinage dies portraying his brother and successor, George VI, some 1936-dated coins were struck with a small dot at the base of the reverse to indicate they actually were made in 1937. And when India's last-minute independence forced a change in the monarch's imperial titles as presented on coinage, a small maple leaf near the date "1947" appeared on some coins made in 1948, before the royal titles could be modified.

Coins, currency and conflict. The abundant, ruinous currency issued by the Confederate States of America and the immense volume of cent-sized Civil War tokens that circulated in the North speak to the destructiveness of the American Civil War. Similarly, Mexican money, like the nation itself, was severely convulsed during the Revolution of 1910-20. With authority in question everywhere, coins and currency were issued by competing national governments, individual states and even armies. Some were crudely made, others were intricately engraved. One audacious issue proclaimed MUERA HUERTA, or "Death to Huerta" (the leader against whom rebellious forces were arrayed). Revolutionary bronze coins, with the same designs as earlier issues but smaller in size, were issued under the authority of Emiliano Zapata and Pancho Villa when they controlled the capital in 1915. These and other Revolution-era issues are tangible, sometimes chilling, testimony to a tragic period in Mexico's history.

Common origins. The three major nations of North America also share a common monetary symbol. The Mexican peso, the U.S. dollar and the Canadian dollar are abbreviated "$" because, one way or another, all were derived from the Spanish colonial 8 reales. This large silver coin, also known as a "piece of eight" or "Spanish Milled dollar," was produced in enormous quantities at mints throughout the hemisphere.

Large, silver pieces. All three nations have produced their own versions of their progenitor, the Spanish Milled Dollar, in the form of large, silver coins.

After Mexico achieved independence from Spain in 1821, the new nation struck prodigious quantities of 8 reales for the rest of the century. Like its colonial predecessor, the Mexican "Cap and Rays," the 8 reales was truly a worldwide coin, and many are found with chopmarks imparted by Asian assayers attesting to the pieces' weight and fineness. This is the coin the U.S. Trade dollar briefly (and unsuccessfully) attempted to compete with in world commerce. In 1898 the 8 reales was replaced by a similarly sized coin denominated "one peso."

Subsequently, Mexico issued many dollar-sized silver pieces with historic and appealing designs, including:

In the United States, the Spanish dollar had been the de facto money of Britain's American colonies. So, when Alexander Hamilton created the country's coinage system in 1792, he defined the silver dollar as equivalent to the 8 reales (taking an average weight based on a sample of coins in circulation). Dollar coinage started slowly, but from 1878 to 1935 vast quantities of Morgan and Peace dollars were struck to support silver mining interests. Unneeded and unwanted, few saw circulation at the time.

Canada, like the United States, looked to its southern neighbor when creating its monetary unit. The Canadian dollar was defined as equivalent to the American dollar in 1857, though no dollar coins were made until 1935. That coin's "Voyageur" (fur trader) motif would be the standard image on Canadian dollars for decades. In addition, several circulating commemoratives were issued with special designs:

Smaller successors. In all three countries, large silver coins have been replaced over time with smaller, base-metal pieces. In Mexico, ever-increasing denominations for similarly sized coins reflect the dwindling value of the peso, a process that culminated in 1993 with the introduction of a "new peso" equal to 1,000 "old pesos." The 10-new-pesos coin actually had a small silver center, but circulation of precious metal was not sustainable after another bout of inflation, and Mexico's coinage today is entirely base metal.

In the United States, large copper­nickel Eisenhower dollars found little acceptance outside of casinos. Subsequently, small copper-nickel Anthony dollars, and golden Sacagawea and Presidential dollars, have been equally ignored by the public. The latest incarnation of the U.S. dollar coin, the American Innovation $1 coin series, is being made only for sale to collectors.

Canada's circulating dollar lost its silver and began shrinking in the 1960s. Since 1987, it has taken the form of a small, gold-colored coin, popular in circulation, and affectionately dubbed the "loonie" after the bird featured on its reverse. 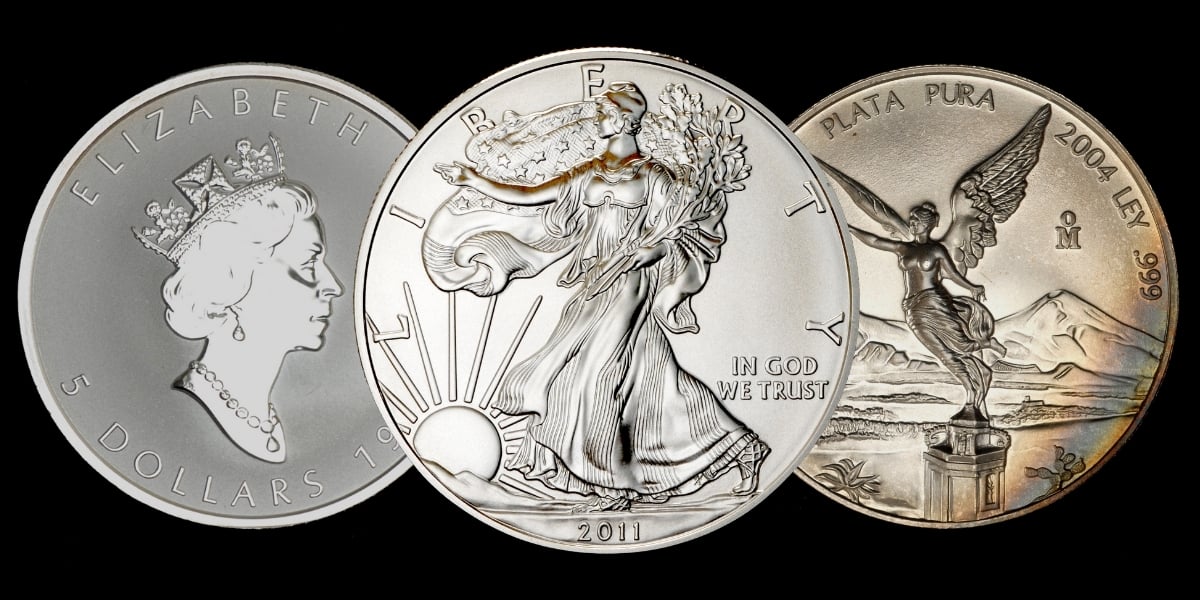 Non-circulating issues. Today, the era of big silver coins in circulation is long gone, but they are still around in different forms. Since the 1980s, all three nations have issued 1-ounce, silver bullion coins on an annual basis: Mexican Libertads, American Eagles and Canadian Maple Leafs. Occasional changes in design (for Canada and Mexico) and different finishes add a touch of diversity to the series. The United States and its neighbors also have minted numerous, non-circulating commemorative silver pieces for sale to collectors.